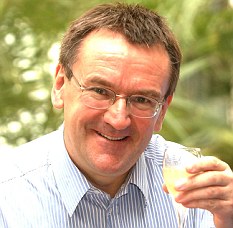 Frank Barrett was Travel Editor of The Mail on Sunday for 25 years, and before that was Travel Editor of The Independent which he joined at the newspaper’s inception in 1986. He regularly appears on TV and radio in Britain and America broadcasting on the subject of travel and holidays. Among the many publications he has written for are Newsweek and Conde Nast Traveler..

He has written a number of travel books including, most recently, the best-selling ’Treasured Island’: an account of the UK’s literary places, and `Where Was Wonderland?’ a guide to the real-life locations of classic children’s books such as Anne of Green Gables and The Secret Garden.

Frank first holidayed in France in 1962 at the age of eight and has returned every year since. At a meeting of the Association of British Tour Operators in France at Disneyland Paris he spoke on the subject of ‘…and that’s why I hate the French..’ which was watched by a stoney-faced French minister of tourism sitting in the front row of the auditorium.

He has won several Travel Writer of the Year awards, including the prestigious British Press Award for travel feature writing. He is married with two children and has lived in the West Country city of Bath since 1982.

Frank was the first person to spend a night in Madame Tussauds Chamber of Horrors and didn’t get the cash reward promised by Charles Dickens.

What I’m planning to talk about fits in very nicely with the current situation. I’ll be talking about how travel began in the 1960s – my first family holiday abroad when I was eight in 1962 to a pre-erected campsite in Dinard (we travelled back via Paris and found ourselves in the capital on the day that they tried to assassinate General de Gaulle in Le Petit Clamart). That’s the thing about travel, there’s always something going on to bugger up your plans. I was very friendly with Freddie Laker so had a front row seat during the Eighties when air travel boomed. (I did two separate Concorde day trips: one to Barbados and one to New York. I travelled around the world – mostly first class – in two and a half days…) But even before coronavirus I was questioning the incessant growth of world travel – how could it possibly be sustainable or even desirable. Now that events have overtaken us, we all need to examine the question of holidays and leisure travel.
As a title…Bumpy Landing: travel’s rapid journey from boom to bust?
We’ll bring our own hand gel and toilet paper…:)